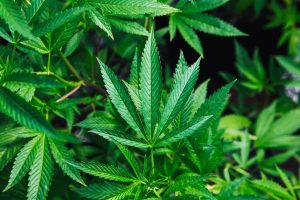 Marijuana is known by many names and is consumed by many for medicinal and recreational purposes both legally and illegally. In Illinois, it will be decriminalized for recreational use for humans in January of 2020. Marijuana consists of the dried leaves and tops of the Cannabis sativa plant while “hemp” is a term generally reserved for the stems. Marijuana is diverted into assorted consumable forms while hemp is made into rope, canvas, and other materials. Hemp plants are legal to grow so long as they contain less than 0.3% THC, the chief recreational cannabinoid of marijuana.

Cannabinoids are the active marijuana-derived substances that have pharmaceutical activity. Over 480 relevant substances have been isolated. The amount of each contained in a sample of marijuana leaves will depend on the subspecies of plant, how the leaves have been dried, the time of year the leaves were harvested, the age of the plant, and other factors.

The psychoactive chemical that makes marijuana a recreational drug is delta 9-tetrahydrocannabinol, more commonly called THC. Regular marijuana is typically 1-8% THC while hashish, made from the flowering tops of the plant and their resins, can contain up to 10% THC.

Another cannabinoid chemical is cannabidiol, commonly referred to “CBD”, which is not considered recreational and is of a more medicinal nature. Cannabidiol has been used in human medicine to mitigate anxiety, improve appetite, relieve nausea, control seizures of certain types, and assist in sleep disorders. Assorted CBD products are available for human and veterinary use. Before utilizing one of these products for your pet please consult your Veterinarian.

With the coming decriminalization, it is possible that marijuana exposure to our pets is more and more likely. Signs include incoordination and listlessness along with dilated pupils, slow heart rate and sometimes urinary incontinence. A characteristic startle reaction has been described where the pet appears drowsy and even may begin to fall over but catches balance. Marijuana toxicity can look similar to intoxication with numerous other sedatives, but the most serious consideration is anti-freeze poisoning, which looks similar in its early stages and is usually fatal if not diagnosed early. Toxicity issues also arise with what the plant has been made with. For example, if the Marijuana were baked into cookies or chocolate toxicity issues may also arise.
If your pet is experiencing any of these signs please seek immediate veterinary attention. Also, if you present for this emergency to your veterinarian please tell us. There is no judgment; our goal is simply to treat your pet in crisis. Even more importantly please hide your stash in a pet-proof container.

Accessibility by WAH
Call Us Text Us